This morning I went to the English service of the international church and then in the afternoon I went to the Săbolciu gypsy village with five other people. I had such an amazing time in Săbolciu today with the kids and the families there! I went to the church service with Dan, Steve and three of our volunteers from the orphanage. 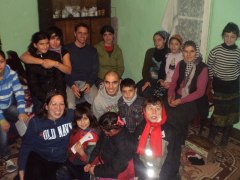 through the books of Acts. Steve preached the message and Dan translated for him. Today we did the first chapter from the book of Acts. I just want to praise God for how He spoke to my heart when I heard the sermon! I just feel so encouraged of how God has been speaking to my heart lately and working in my life.

We also had a time of singing some praise and worship songs and then at the end we had a time of prayer. I was so touched by Ica’s prayer because her prayer was so deep and genuine. During the prayer time I also felt God’s presence in that room is such an amazing way. I pray that God will rise up the small group of Christians that are in the Săbolciu gypsy village to be intercessors for the people in the community and also witnesses as well. I know and believe with all my heart that God has amazing things in store for this village!

In the evening I spoke to my parents on Skype. We ended up talking for almost two hours and we had one of the best conversations ever! I finally spoke to my parents what has been burning on my heart over the last few weeks. I wasn’t sure what they would think or how they would react to how the Lord has been leading me to pursue this amazing opportunity.

After I finished sharing everything they were extremely supportive which was very, very encouraging to me! I believe that the Lord had already prepared their hearts even before we had this conversation and now it’s just overwhelming for me to realize how real this is becoming. It’s just awesome to see how the Lord has been working in not only my life but my parents lives as well! God is so very good and faithful!!!! What an amazing day this has been today!!

Wow, this is such a beautiful song by the band United Pursuit!

The song is called “Call Me”

I am from Whitby, Ontario. I have lived in Romania for 9 years as a missionary but I am currently in Canada on a sabbatical break at this time. I have also lived in South Korea for a year and I have also been to Russia, Uganda, Albania and the Czech Republic on short-term mission trips. In 2012, God also gave me an amazing opportunity to go to Mozambique for the Harvest Mission School with Iris Ministries as well. I love children, reaching out to people who are in need and vulnerable, I have a passion to fight against the injustice issue of human trafficking and to simply share the love of Jesus wherever I go. I also love cats too and I have a cat of my own named Minnie!
View all posts by Andrea →
This entry was posted in Uncategorized. Bookmark the permalink.