On Friday October 24th in the evening we all traveled to Prod (it is a small village that is kind of near Sighisoara) for our fall base staff retreat. We all traveled in different vehicles and we met together at the retreat/ camp in Prod in the evening. I traveled with Dan, his wife Dorina, their daughter Naomi and also Florina. When we were all together in Prod we ate a late dinner and then we had a wonderful time of fellowship until late in the evening where we shared some of our stories and testimonies.

On Saturday October 25th we had a full day together which was wonderful. In the morning we spent time together in worship, praying for one another and waiting on God. The Lord spoke to each of us in different ways and we were all really encouraged. God reminded me of the importance of forgiveness especially forgiving myself which I find difficult to do at times. God reminded me of the scripture verse from 1 Peter 5:7 which says “Cast all your anxiety on him because he cares for you.” I really felt in my heart that God wanted me to put all of my worries and anxieties into this huge fishers net and then to throw it to Him as a release and then as I do that I will receive more of His peace, love, joy, provision, etc.

8:28 – 29 which says “And we know that in all things God works for the good of those who love him who have been called according to his purpose. For those God foreknew he also predestined to be conformed to the likeness of his Son, that he might be the first born among many brothers”. Then I shared the scripture verse from Revelation 1:8 which says “I am the Alpha and the Omega, says the Lord God, who is, who was, and who is to come, the Almighty.”

After I shared with the staff the scripture verses that God had put on my heart I then shared with them that God often speaks to me that He is painting a picture for our lives but when we are very close to it, we cannot see the beauty of the painting so it just looks like blobs or blurs but when we take steps back we can see the bigger picture, the portrait that He has already painted. I felt in my heart to share this with them because it often encourages me when I think about it of how God sees the bigger picture but we often don’t it as God does because we may be in a middle of a difficult season in our lives.

It really does give us a lot of hope to know that God is such an amazing artist and He has already painted a beautiful portrait for our lives that is filled with so much hope and destiny. I also shared that the future maybe unknown to us at times but it is not to God because He is the Alpha and the Omega for He is the beginning and the end and He has a future of hope and destiny for our lives.

After we all had a time of sharing I was really encouraged that the staff took some time to pray for my family and I especially since I had just received news that my Grandpa had died the previous night and I couldn’t be with my family at this time. I felt really encouraged to be surrounded by so much love and support from my YWAM community here that have become like a family to me.

All of the girls!

enjoyed the outdoors by going on a walk around Prod in the afternoon. Late in the afternoon we watched a teaching video on trust and trustworthiness by Andy Stanley. I don’t think I have heard a teaching on this before and it really was quite helpful to hear it especially together as a staff team. I learned a lot from it, and then we shared our thoughts afterwards and had a time of prayer. I don’t know why but this is something that I really struggle with at times so when I prayed I first repented before God for my lack of trust in Him that is in my heart at times and then I asked Him to help me to have that simple childlike faith to be able to come to Him as a little girl because He is my Daddy!

Around 6:00pm we ate dinner. In the evening we had a fun time of fellowship with each other as we played some card games like Dutch Blitz. Some of us became quite competitive but it was all for having some fun and to have a time to hang out with each other in other words we had a good bonding time together!

On Sunday October 26th we had another time after breakfast to spend time in God’s presence as a staff team as we worshiped together and took some time to hear God’s voice. The Lord spoke to us in many different ways and we were all very encouraged as we shared with each other what the Lord has placed on our hearts for us individually and as a whole staff team.

This is what I received from the Lord during that time that we had waited on God. I shared with everyone the scripture passage from Hebrews 12:1-2 which says “Therefore, since we are surrounded by such a great cloud of witnesses, let us throw off everything that hinders and the sin that so easily entangles, and let us run with perseverance the race marked out for us. Let us fix our eyes on Jesus, the author and perfecter of our faith, who for the joy set before him endured the cross, scorning its shame, and sat down at the throne of God.”

with them that it really is a call to endurance. When we waited on the Lord I didn’t really “see” this picture before my eyes however God spoke to me about it and it became so real that it was almost like a scene right before my eyes. I imagined that we are all running in a race, a marathon and not a sprint. The believers that have gone before us are on the sidelines cheering us on, angels are in the crowd. Our Father God is at the end saying “you can do it, keep running and don’t quit!” We are kind of like a child learning to walk at times during the race. Sometimes Jesus comes by our side and runs along us and cheers us on as well. There are also hurdles and challenges along the way but as we are running with perseverance by the grace of God we are able to overcome all of these obstacles that we encounter along the way.

This picture that God gave me really encouraged my heart so much that it touched me deep in my spirit to not give up no matter what but to keep running and to persevere until the very end because we really do have so many people cheering us on to keep going including the saints that have gone before us, angels, Jesus and our Abba Father God! We are definitely not alone in this race but are surrounded by the body of Christ to keep going forward so I say with faith in my heart and proclaim that I will not give up no matter what! Amen! I also believe that the Lord had led me to step out in the prophetic once again during the weekend which really encouraged my heart a lot because I haven’t done it in a while.

Lindsay, Marianna and I.

After our amazing morning spent in God’s presence we ate a delicious lunch. I was very so happy that we were blessed with some homemade sarmale (they are small cabbage rolls and it is a Romanian traditional meal that is often served at Christmas time). After lunch we took a group picture, and then we cleaned the place where we stayed and then it was time to leave. I got home sometime in the late afternoon that day.

I am so very grateful that we had a YWAM base staff retreat which was the first one for me since I have joined staff at the Târgu Mureş base in Romania. It was such a wonderful and refreshing weekend away with my YWAM Târgu Mureş family. I am so thankful for Florin and Florina who are my base leaders and their beautiful daughter Nadia. I am thankful for the rest of the staff team that I got to spend the weekend together (Lindsay, Marianna – who were my roommates, Peter, Dan, Dorina and their daughter Naomi) and also Michael and Mitzi joined us too who will be our students in our next DTS. 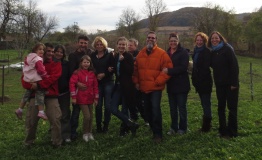 I am from Whitby, Ontario. I have lived in Romania for 9 years as a missionary but I am currently in Canada on a sabbatical break at this time. I have also lived in South Korea for a year and I have also been to Russia, Uganda, Albania and the Czech Republic on short-term mission trips. In 2012, God also gave me an amazing opportunity to go to Mozambique for the Harvest Mission School with Iris Ministries as well. I love children, reaching out to people who are in need and vulnerable, I have a passion to fight against the injustice issue of human trafficking and to simply share the love of Jesus wherever I go. I also love cats too and I have a cat of my own named Minnie!
View all posts by Andrea →
This entry was posted in Uncategorized. Bookmark the permalink.